I know it’s a cliche, but: It Never Rains But It Pours

On Wednesday, when we had been dry for weeks, rain was predicted.  We had heard that before.  Just the previous day, it had rained in Madison, but not at home.  And then on Wednesday morning, rain happened again in Madison.  We got the ominous/promising clouds, but as they approached our house they parted and left us dry.  (My son said, “Kind of like a reverse Charles Addams house.”)  So when it actually did begin to rain lightly late that afternoon, I was so excited I took a picture of it raining on the grill (for contrast).

THEN  the weather radio began going off.  As it merely rained here, neighboring counties reported severe weather.  The sky became darker and darker, and then suddenly the severe weather was in our little quadrant of Dane County, and we (well, the cat and I) were heading for the basement.  For over half an hour, the storm raged and the lights flickered. Water flowed through the cracks in the 100+year-old foundation.  When it was all over the air was cool and our house was spared from the destruction of buildings we only heard about later.

When the storm hit, dinner was in the oven.  I had decided to use the only things that we were actually getting in the garden – zucchini, basil and spinach – to make some lasagna a la my favorite recipe from Fat-Free Vegan.  I replaced the lasagna noodles with grilled zucchini,

and the frozen, chopped spinach for lots and lots of steamed fresh stuff (with some chard and beet greens thrown in).

By the time we got out of the basement, it was done! No photos, but very delicious.

The next day, we went out for a walk.  Wow!  We had heard of some very heavy winds, and they did a number on the already suffering corn.

A tree on the corner of our property had been knocked right off the bluff.  (Look in the top left corner to see where it broke off.)

A tree down the road, always interesting because it was growing right through the fence, also suffered.

But the worst on our own road was the damage to a clump of aspens I’ve always called the Three Sisters.  One had been snapped off right at the base!  With the damage to the root system, I don’t know how the other two will survive. It’s very sad. 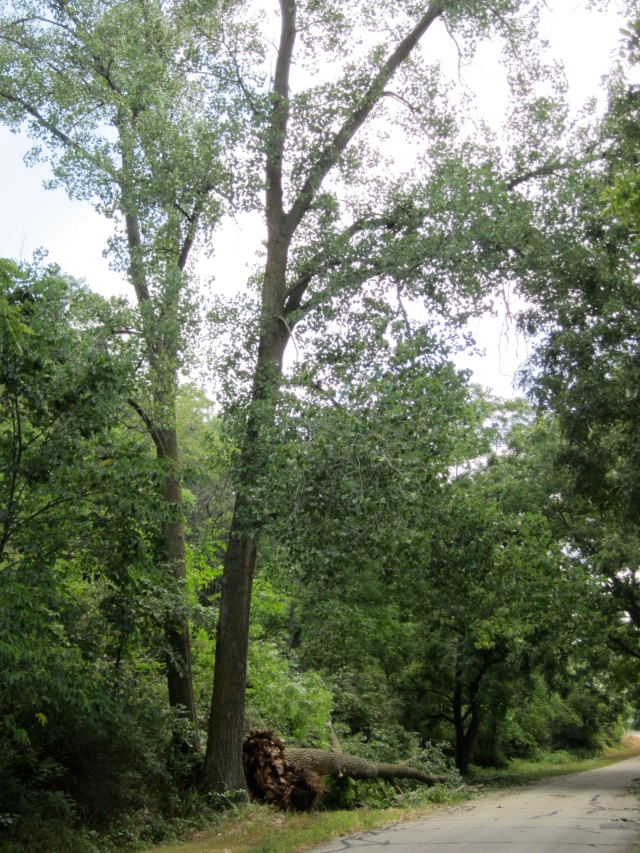 In other, happier news, we made some delicious biscuits using Bob’s Red Mill Gluten-Free Biscuit Mix.  It is sooooo easy….

This morning it is raining gently.  Who knows whether the drought is over, but the damage has been done.  I guess we’ll just have to see.

2 Responses to I know it’s a cliche, but: It Never Rains But It Pours